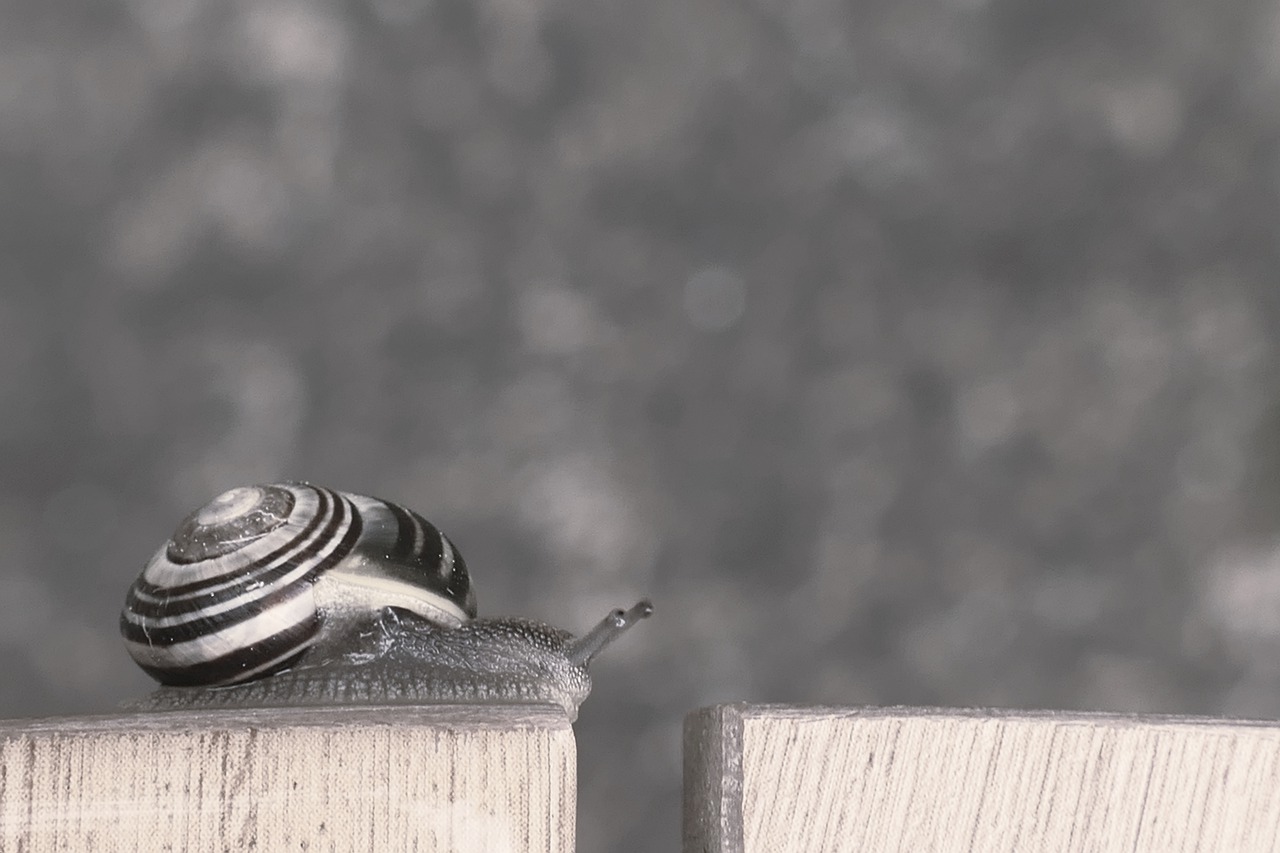 How I Reduced the Thundering Herd

A cache stores various types of data so that the data can be served faster rather than retrieved from the distant source or recomputed every time it is required.

You may cache, for example, resource-intensive functions, endpoint functions or anything else to avoid repeated computation and to improve the responsiveness of your web page.

As a result, pages can be served to the users more faster, and the server can stop overusing resources and operate reliably.

A web server should handle multiple requests simultaneously. When a user requests a page, there are also other users requesting the same or another pages. In this situation, caches might not work as expected.
Let me explain my experience.

One of my jobs at my previous company was to develop a social community website. During Korean National College Entrance Exam period, almost 10,000 posts are uploaded there a day and even more comments than that a day.

It has a small section visible on all pages that shows the top 5 most commented posts. All users request that section every time he/she visits, and that means, the function computing the rank should be executed on almost every request.

Fortunately, because a little delay in reflecting the rank is acceptable, and unfortunately because computing it involves heavy database query, there is a cache for computing the rank with 10 minutes of TTL.

When the time comes, the cache expires.
The first request after the expiration will encounter a cache miss, so it will call the computing function and will cache the returned value, the rank.

But what if it takes 10 seconds to finish the function and to populate the cached value? Let's see what happens.
The first request of a user calls the function to compute the rank. At the same time, the second request of another user also does. Until any request so far finishes the function and succeeds in caching, the third, fourth and others do in the same way.

Consequently, even though we have cached the function and expected it to be executed only once whenever expiration occurs, it is executed multiple times by different requests at the same moment. It is called a "Thundering Herd" problem.

In this situation, requests unexpectedly bypassing the cache eventually make database load increase. As the load increases, the response time from the database may increase, and the more hanging requests, the more chances of the server outage.

Actually, during the exam season, my sole database had been overwhelmed by the heavy query load whenever the cache expires, and eventually there were periodical outages until the traffic became stabilized.

The caching methodology above is called Lazy Caching. By using Lazy Caching, when your server receives a request from a user, it checks whether the data is cached. If so, it uses the data right away, but if not, it computes and caches the value again and returns it to the user.

Alternatively, you can use a Write-through cache. When the original data having been cached is changed in the database, you also reflect the change to the cache. TTL is not required because the cached data is always up-to-date.

However, there are cases where it is difficult to implement. Especially my case was. So I decided to make a slight change to the caching package for a workaround.

Flask is a lightweight WSGI web application framework for python, and one of the most loved packages related to Flask is Flask-Caching.

I won't talk about what is Flask and how to use it, but will take a brief explanation about Flask-Caching (v1.10.1) What you need to do is to create a Cache object and a decorator @cache.cached(...) for the endpoint function.

That means, your second request does not reach the endpoint function, but the cache returns the value previously computed by the first request.
That's all the cache does.

You also have to note that cache.cached(...) does not consider parameters passed to the function. For example,

The results of add function are the same although passed are different parameters.

As I said, unexpected requests can reach into the function at the moment the expiration occurs. I will show you the modified version of cached method for a workaround. You can modify the memoize method in the same way if necessary.

The original code is here. To put it simply, the cached method executes the following steps.

Now, what we want to do is to force the cached data to be updated conditionally before expiration occurs. It would be great if the update(renewal) occurs when the expiration is imminent.

First of all, we add two arguments to the cached method.

renewal_prob specifies in what percent chance of renewal could happen. 0.01 means 1%.
renewal_start is to calculate renewal_time_left_thres variable described below.
If at least one of them is set None, the renewal will not happen.

And we need to set two variables and two function attributes.

Although timeout could be None and will be replaced by default value at the appropriate time, we should replace it explicitly to calculate renewal_time_left_thres.

expired_at stores the expiration timestamp of each cache key.
in_progress is a flag to check whether the renewal is in progress by another thread.

Now, we will add more logic into decorated_function. We want to set 'forcing update' flags on when ...

The first condition is to maintain backward compatibility, and the second is intended to limit the period in which the renewal could occur. The third is to keep the renewal from being executed in more than one thread in a process at the same moment, and the last is necessary to decrease the chances of renewal when handling multiple requests.

When the renewal gets its turn, the lines in the if statement are executed. Consequently, the in-progress flag is set, rv is set as None, and found is False. 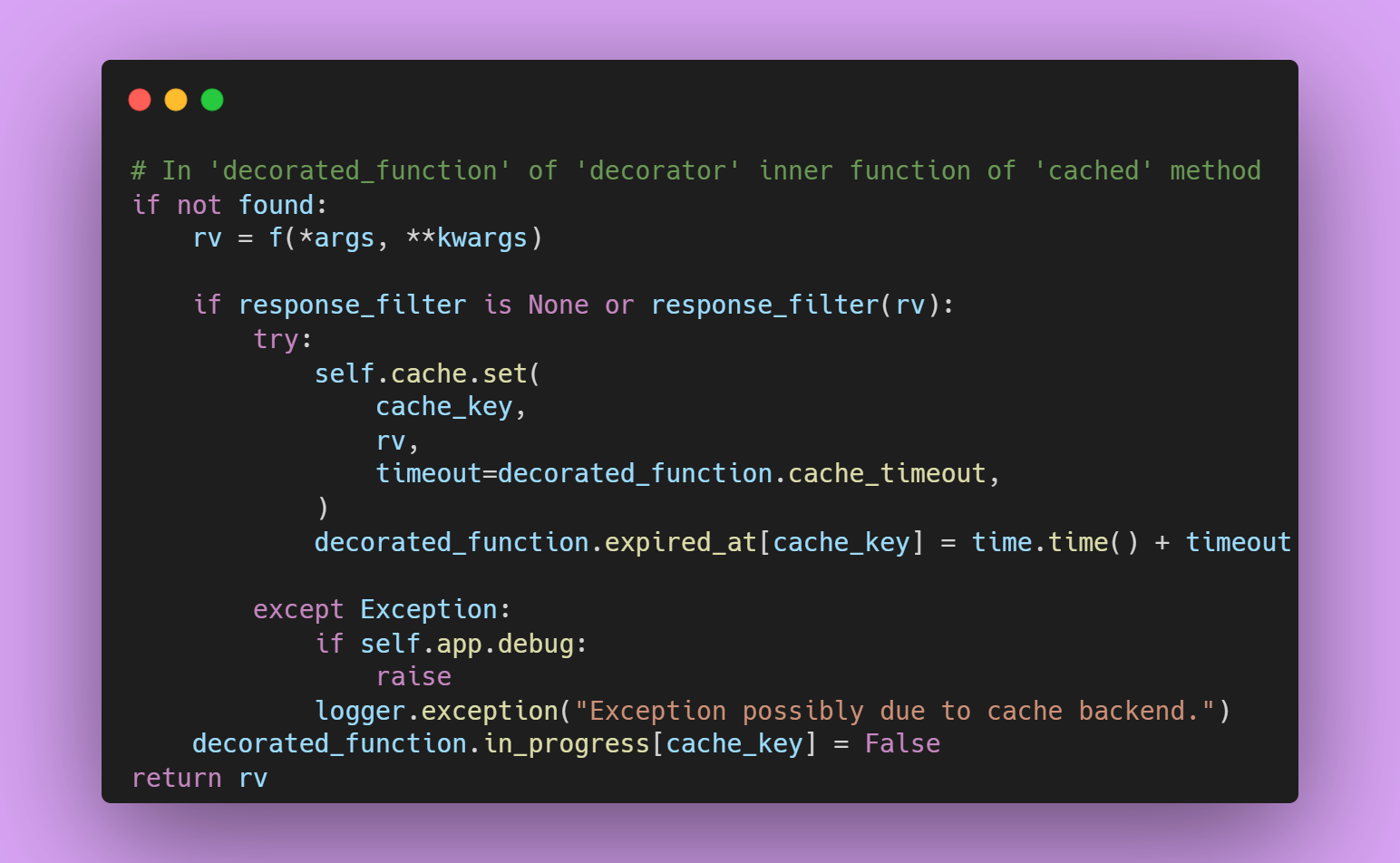 Because found is False, the original function, f, is called and the return value is populated into the cache storage. The expiration timestamp is recalculated, and the in-progress flag is set off.

Finally, the decorated_function returns the cached data (rv) as a result of calling f function.

To measure the improvement, I had built a uWSGI + Flask server in a docker container, configured two endpoints decorated with cache.cached. Both endpoints sleep 3 seconds and return an empty string, but one uses the original Flask-Caching cache object, and the other uses the Probabilistic Renewal cache object.

I sent 1,000,000 parallel requests to the endpoints respectively and counted the number of cache miss.

With the original cache object, all requests were handled for 16 minutes and 43 seconds. The cache miss occurred 960 times (excluding the misses at the initial start-up).

When it comes to the customized one, they were handled for 17 minutes and 5 seconds. The renewal happened 65 times and no cache miss occurred.

Although request handling time was increased, Probabilistic Renewal Cache had no cache miss. Even considering the actual function calls, it reduced the number of execution of the original function by more than 90%. Moreover, when I replaced decorated_function.expired_at and decorated_function.in_progress with values in a cache (ex. {cache_key}:exp_at) to sync them across the processes, I got 97.71% of decreased number of execution.

Of course, it depends on the machine it runs, the function to be cached, and other factors. However, our cached method succeeds in reducing the thundering herd problem.

However, there are some limitations and tradeoffs.

If the server is configured to use volatile cache storage and when it restarts, it will always execute the original function to handle all requests at that moment because there is no cached data at all.

Also if servers are not configured to use Remote Cache, and for this reason, the cached data is not shared across the servers, each server will have its own cache storage and there would be more cache miss and renewal requests.

There would be a memory leak because we use two dictionaries to store expiration timestamps and in-progress flags of each cache_key. But, it can be resolved with the uWSGI max-requests option that makes WSGI workers (processes) reload themselves after each of them serves the specified amount of requests respectively, making the leaked memory released.

And you should heuristically tune the renewal_prob and renewal_start variables depending on the traffic pattern, function logic, and so on.

I showed you the code-level workaround for the Thundering Herd problem. It is tricky to tune the parameters, but it will make your server more reliable.

If it seems to be slowing down periodically, you may suspect this problem and can fix it with the Probabilistic Renewal Cache.